A few historical facts about DKG/Ohio…

Ohio was the 28th state selected by Delta Kappa Gamma to honor women in the field of education. Margaret L. White, an elementary supervisor with the Cleveland Public Schools in 1938, made the initial contacts with women leaders in Ohio education. Margaret had been mentored by Annie Webb Blanton, founder of Delta Kappa Gamma, as a university student and later as a teacher in Texas.

Sixteen founders were initiated by Annie Webb Blanton on January 22, 1938. They were educational leaders from around Ohio and became charter members of chapters in their area. The first state officers were selected from these women. Alpha Chapter was chartered on that same day. Margaret White was the first state president and first chapter president of Alpha. Ten chapters were chartered in 1938. Dues were $3.00 plus a $1.00 scholarship fee. Within two years the Ohio organization had fifty-eight chapters.

From 1938 until July 2017, the Ohio organization of Delta Kappa Gamma was known as Alpha Delta State.  At the International Convention, a Constitutional amendment brought about a name change for all state organizations.   All states, countries and regions are now referred to by their geographic location.  Ohio State Organization (OSO) is the legal name by which we are now recognized.  OSO currently has 77 chapters with a total membership of 2,825 key women educators.

Researched and compiled by the ad-hoc historical committee.
Please note:  due to the memory requirements, the book must be downloaded in sections.  Click on the individual sections. Once the sections are compiled, staple in the center to produce a book. You will need to have Adobe Acrobat Reader to download the publication. 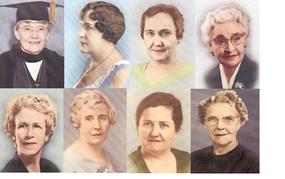